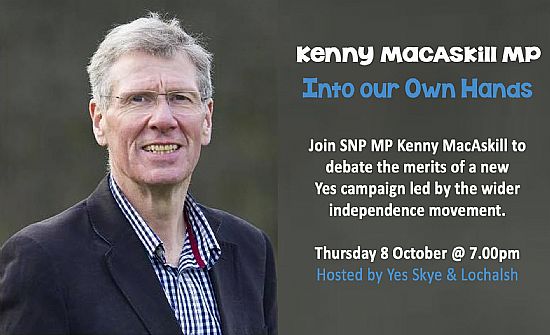 Join SNP MP Kenny MacAskill to debate the merits of the wider independence movement leading the next Yes campaign.

Kenny MacAskill recently argued for the wider independence movement to lead the next Yes campaign. "The Scottish Government cannot be the issue in a debate on the future governance of Scotland. Similarly, this is not about any political party, but about the Scottish people."

"Firstly, steps must be taken bring the numerous Yes groups and independence campaigners together. Steps should be taken to establish a steering group that can co-ordinate and plan. The groups are and will remain autonomous, but a central team is important. Moreover, the leadership of a mass movement should come from within, not be appointed from on high."

The discussion will focus on what practical steps should be taken to get the Yes movement campaign ready, and what support is needed. A constitutional convention, reaching out to the Scottish diaspora, and preparing a platform for the pooling and update of existing resources to ensure that limited funds are maximised, are just some of the ideas he proposes.

The meeting will be held on Zoom with joining details sent out two days before the event.

Hosted by Yes Skye & Lochalsh. This is a ticketed event, but entry is free. Priority will be given to those from groups within the Highlands and Islands network.